James B. Moore was born in Miami, Florida.  In 1966 after graduating from Missouri State University, majoring in political science and economics, he came back to Florida.  He settled in West Palm Beach and took a job working as a property manger and all around maintenance  person for Southeastern Home Mortgage Company.

In 1969, Moore, while employed by Southeastern, developed Meadowbrook Mobile Home Park-one of the first parks ever to construct it’s own par three golf course meandering through it’s trees. He also built the club house there.

In 1972 Moore went into business for himself building homes in Altamonte Springs and Longwood near Orlando, then branching out to Brevard County.  There he constructed 71 homes in a subdivision known as Cocoa North.  In Orlando he developed and sold out successfully two subdivision known as San Sebastian and Northwood.

In 1975, while those projects were just winding down, Moore expanded to Hillsborough County successfully completing Kingsway Downs, Groves North and Meadowridge--over 500 homes in all.

In 1977, Moore began a development known as CAM Estates on Belvedere Road in Palm Beach County.

He received awards from Florida Power & Light as well as Tampa Electric.  In fact  even today FP&L says that CAM Estates still has the lowest electric useage of any subdivision in Palm Beach County.

It was here where Jim Moore pioneered an energy package as standard equipment for every one of his homes.  This included features like high efficiency air conditioners, insulated windows, hot water heaters controlled by clocks that could be set to go off when no one was home, & cellulose wall and ceiling insulation (that could be sprayed on the wall to close up all those little holes).  He was the first to do this in Palm Beach County and possibly in the State.

By 1981 he completed 300 homes in this area that were financed through FHA and VA, one of the first in the county completely financed in this manner.  Contracts for 150 homes were written in the first year.  Also during this year Moore married Eileen Coates who was employed by Moore’s firm at the time.  During the 1980’s Moore built homes in Woodcrest, Presidential Estates and other locations in Palm Beach County where lots could be obtained from individuals.
During the 1980’s Moore stopped buying large tracts of land for development and down-sized to buying lots from individuals so that the pay off time was less as was the risk.  In the 1990’s Moore became involved with the creation of a Palm Beach County community bank known today as Grand Bank & Trust of Florida.
In 2001 Moore’s stepson, Matt Coates joined the firm.  This led to the current name: Moore & Coates Construction, and they started building homes in Western Palm Beach County known as "The Acreage".
In 2003 Moore and his son began building homes in Port St. Lucie and then moved to Ocala where the demand for housing was quite high. 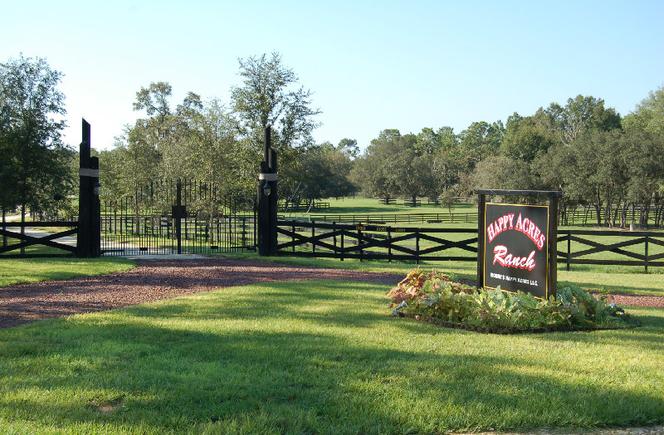 CONTENT COPYRIGHT 2017. ocalahappyacres.com ALL RIGHTS RESERVED. PLEASE DO NOT REPRODUCE ANY IMAGES OR WORDING WITHOUT EXPRESS PERMISSION OF OWNER.

The area surrounding the Ranch has 50 miles of trails just out side the front gate. Only 3 miles from the ranch is the Pruitt Trail-head which also merges into the Florida Greenway that provides trail riding through the central part of the State.  The surrounding area also offers boating, canoeing and swimming just 6.5 miles from the ranch at Rainbow Springs and the Rainbow River.  Dunnellon which is 6.5 miles west and Ocala which is 10 miles to the northeast places our ranch right in the middle of some of the best golf courses in Florida.  Lake Otting Park, is just 1.5 miles west of the ranch and offers tennis and picnicking.  We have provided some links of these various attractions on our web page under IMPORTANT LINKS.

CLICK ON ABOVE PICTURE  FOR OUR PROFILE PHOTO ALBUM 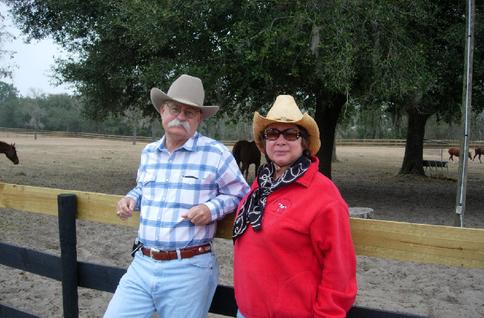 Happy Acres Ranch is a working ranch of 30 acres located in the southwest corner of Marion County and is owned by James B. Moore.  The ranch provides sales and services primarily involving horses in such settings as, boarding & cottages.

For information on our sister company Moore & Coates Construction,

In August 2005 Moore purchased a little farm in Dunnellon, Florida just 12 miles south west of Ocala.  It soon became known as Happy Acres Ranch.  It was purchased only for a get-away retreat at first.  Then when the housing bust came Moore began liquidating as many properties as he could all over the State and eventually regrouped at the Ranch.  The idea of opening the Ranch to the public never entered Moore’s mind at first but after  visitors began asking if they could come to see the horses and, even board their horse there Moore began thinking it would help pay the bills so why not.

Happy Acres Ranch is a working ranch of 25 acres located in the South West corner of Marion county and is owned by the James B Moore Trust.   We provide services and sales related  primarily to horses.   In addition we offer boarding accommodations for horses and  guest cottages and Groom's Quarters for vacationers, business guest and lay overs.  Also,  trail rides,  RV hook ups,  and riding lessons.

The area surrounding the ranch has 50 miles of trails just outside the front gate.  The Pruitt Trailhead is only 3 miles from the Ranch which also merges into the Florida Greenway which provides trail riding through the central part of the State.  Also the surrounding area offers boating, canoeing and swimming just 6.5 miles from the ranch at Rainbow Springs and the Rainbow River.

Dunnellon to the west 6.5 miles and Ocala to the North East 12 miles puts our Ranch right in the middle of some of the best golf courses in the State.

Lake Otting Park is just a mile and a half from the Ranch. It offers tennis and picnicking and some 80 year old oak trees.

The Ranch grounds will accommodate patrons by the day, week or month. Check our rates www.ocalahappyacres.com and see if it is not less expensive than a hotel.  Where else can you get the atmosphere of the Ocala horse country, than on, a Ocala horse Ranch?  The cottages known as Happy Trails Lodge , Stage Coach Camper and Grooms Quarters "A" & "B" all of which can be seen on the inside on this web page.

Why not have all the accommodations of a home with a pristine view rather than a hotel room.  The cottages have Wi-Fi  internet service, Satellite TV, & some have washer and dryer.

The Ranch has 19 stalls that can accommodate boarders.  They are in two newly constructed concrete block barns.  These two new barns offer new modern bathroom facilities.  Also we provide a private tack room for boarders to lock up their saddles and tack.  We even provide lock up facilities for borders who wish to feed there own horses and need a place to lock up a couple bags of feed or small amount of hay.

Our stalls are 12’ X 12' but can be enlarged to 24’ X 12’ for foaling or post-natal care.  We also provide sleeping quarters in the barn for owners or grooms on one or two day lay-over known as Happy Trails Lodge.  For boarders who want to work their mounts polishing up their skills we have two arenas one lighted.  We also have a 50’ round pen.
Our web site is updated frequently so visit us again if you can and see what’s new at Happy Acres Ranch.